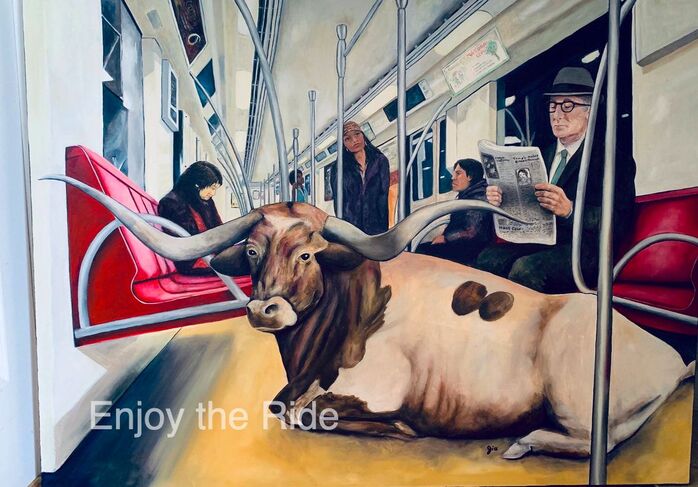 ​Some artists paint as a shamanic act and Jia Apple is among them. She’s done the hard spiritual work of making herself into a dreamer, accessing information from those dead but not gone or from animals and other spirit guides.

Appropriately enough, she and Wendy Tremayne have a two-woman show up at Desert Archaic art gallery called “Other World,” at 324 N. Broadway St., which will be up until Dec. 12 and maybe until Jan. 9.

Apple said, “We are all in this together,” is the main take-away for “Radius of Being,” oil on canvas. Like a dream, each thing in the picture is symbolic and one must weave the narrative together to make sense of it.

Confronting us is a longhorn steer, front and center looking straight at the viewer. Its horns nearly span the width of a subway car, which is a helluva being with a helluva radius to deal with. I’m assuming the subway car is shorthand for our urbanized-removed-from-nature consciousness that has led to a heavy diet of beef with hell to pay in blocked arteries and animal cruelty.

According to Earthsave.org, “It takes 2,500 gallons of water, 12 pounds of grain, 35 pounds of topsoil and the energy equivalent of one gallon of gasoline to produce one pound of feedlot beef.”

Those rich resources could feed and power struggling third-world peoples, represented by various passengers on the train, each a stand-in for Hispanics, Asians, Native Americans and blacks.

“The white man is in a position of power,” Apple said, placing him to the right and front. His homburg hat may be a pun on Magritte’s bourgeoisie man, symbolized by his bowler hat.

On the white man’s paper is a headline, “Temple makes a breakthrough,” which Apple said refers to Temple Grandin, who has revolutionized the pig and cow slaughter industry by redesigning facilities with the animals’ consciousness in mind, giving them humane and calm deaths. Grandin is autistic and credits the predominating “animal” part of her brain as giving her the understanding to design animal facilities.

Ironically, a subway ad touts “Natural Life” above the Native American, whose land and way of life was taken from him.

The colors in the painting are perhaps from the Medicine Wheel, white, yellow, black and red, which represent the four races, among other meanings. The subway floor, on which the steer lays, is yellow or spirit, making the steer our spirit guide in this car hurtling through space. The two conjoined spots on the steer’s side are so distinctive it must mean something; infinity perhaps?

The white curving tunnel perspective Apple employed leads the eye back into space, white being the North and elder wisdom. Shamans often speak of traveling through spirit holes and this painting gives us a ready-made journey.

Apple has several other works in the exhibit that are as rich in symbolism and heart; treasure from shamanic journeys she’s made accessible to us in her beautifully articulated paintings and drawings.